The new scope from the infrared leader

The FLIR ThermoSight® R-Series is the world's first line of commercial Thermal Night Vision rifle scopes for hunters starting at under $3,500.00. Compact and easy-to-use, the R-Series combines the features you want with the thermal performance you expect and delivers rock-solid thermal imaging for seeing predators and varmints in zero light or in the Daytime.

The FLIR ThermoSight® is a High-Resolution Thermal Weaponsight that mounts on any Picatinny (MIL-STD-1913) rail and is the ideal night vision scope because it detects heat energy, instead of light. Conventional image intensified (I2) night vision scopes require illumination from moonlight or other sources, and can't reveal what's hiding in the shadows or in low-contrast environments.
Built by the leader in Infrared Technology, the ThermoSight® R-Series delivers the range of features you want—with the thermal performance you expect. 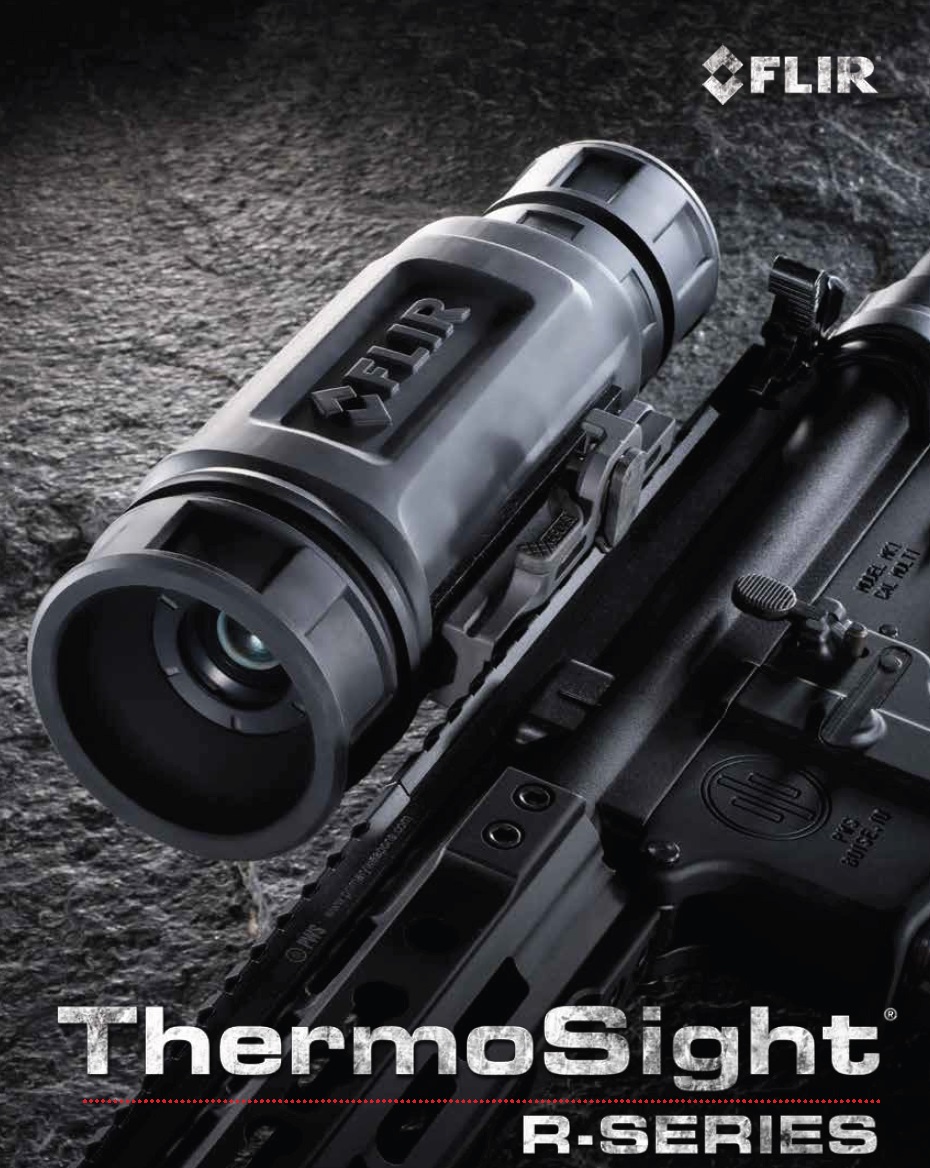 FLIR has been making Thermal Imaging Systems for as long as people have been using the technology, but historically they have always been for governments, and priced beyond the typical consumer's budget. The R-series of thermal weapon sights are the latest offering from FLIR Personal Vision systems, and offer an impressive system for an affordable price. Unlike the T-60, T-70, and T-75 series, the RS units top out under $9,000. The entry level unit, the RS-24 has an MSRP of $3,499.00. 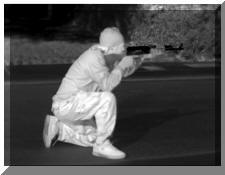 Like the ATN Odin or the Armasight Zeus: the ThermoSight RS is a stand-alone rifle sight built on FLIR’s Tau-2 core with a variety of color palettes and reticles which is much less a “TV screen” and more like a traditional rifle optic with 3" of eye relief and integral Larue mount. With a 640×480 display in all models, you get a clear image through the sight. Recoil is always an issue with rifle mounting Optoelectronics, and FLIR has built a recoil reduction system into the sight. A strategic structural design means that the R-Series is rated for recoil up to a semi-auto .308. 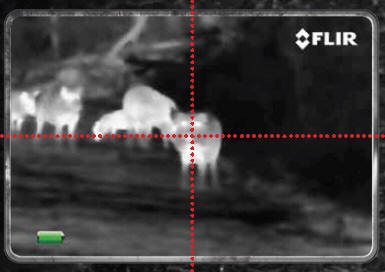 The lowest magnification and sensor is a basic 1X lens with a 240×180 detector and the highest is a 16X option with a 640×480 detector. Reticles are identical between models, but some color palettes are reserved for the higher end units. Interestingly the 320×240 scopes run at a lightning fast 60 Hz, while the base models, and the long range 640×480 options run at the standard 30hz. The high magnification units use a manual focus while the smaller lens units are an autofocus. All units have ± 6 eyepiece Diopter that can compensate for different shooter’s eyes.

What's the right Field-of-View for you?

The ThermoSight R-Series offers a range of lenses to suit your Hunting Needs. The images below show how different lenses impact the Field-of View (FOV) of a scope using 320 x 240 resolution scanning hogs at approximately 50 Yards. 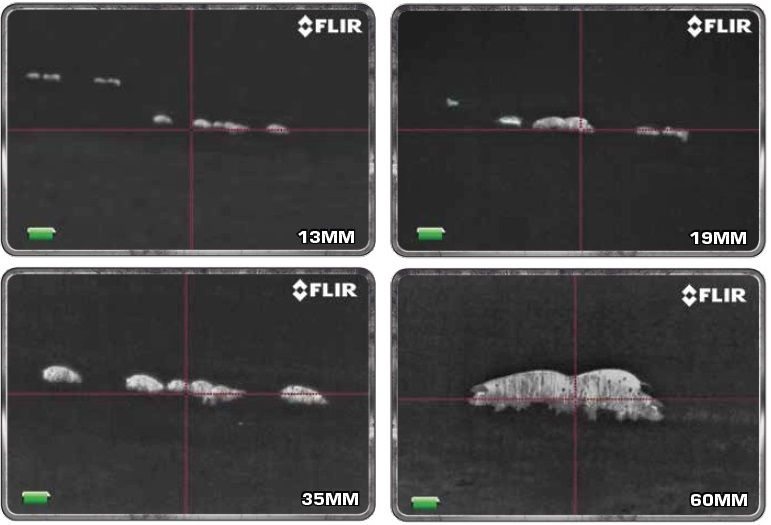 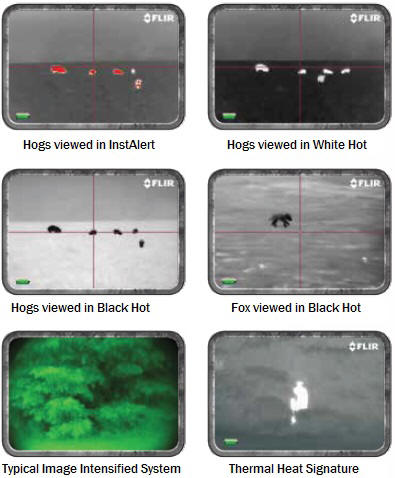 Along with fixed lens options of 13mm, 19mm, 35mm, and 60mm, the R-Series provides three inches of eye relief, up to 16X digital zoom, and multiple reticle options with a repeatable and dependable zero.

Select between "white hot," "black hot," and "InstAlert" palettes, and capture memorable moments with video out (on most models).

Offering up to six different detection palettes, including FLIR's exclusive InstAlert™, which displays the hottest temperatures in RED so you can detect animals, people and other warm objects more easily. The R-Series combines outstanding image quality with an easy-to-use design. The scope optimizes images automatically using FLIR's own advanced image correction technology. And large, glove-friendly buttons combined with a simple menu interface give you access to every key setting in three clicks, or less. 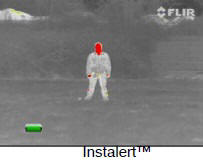 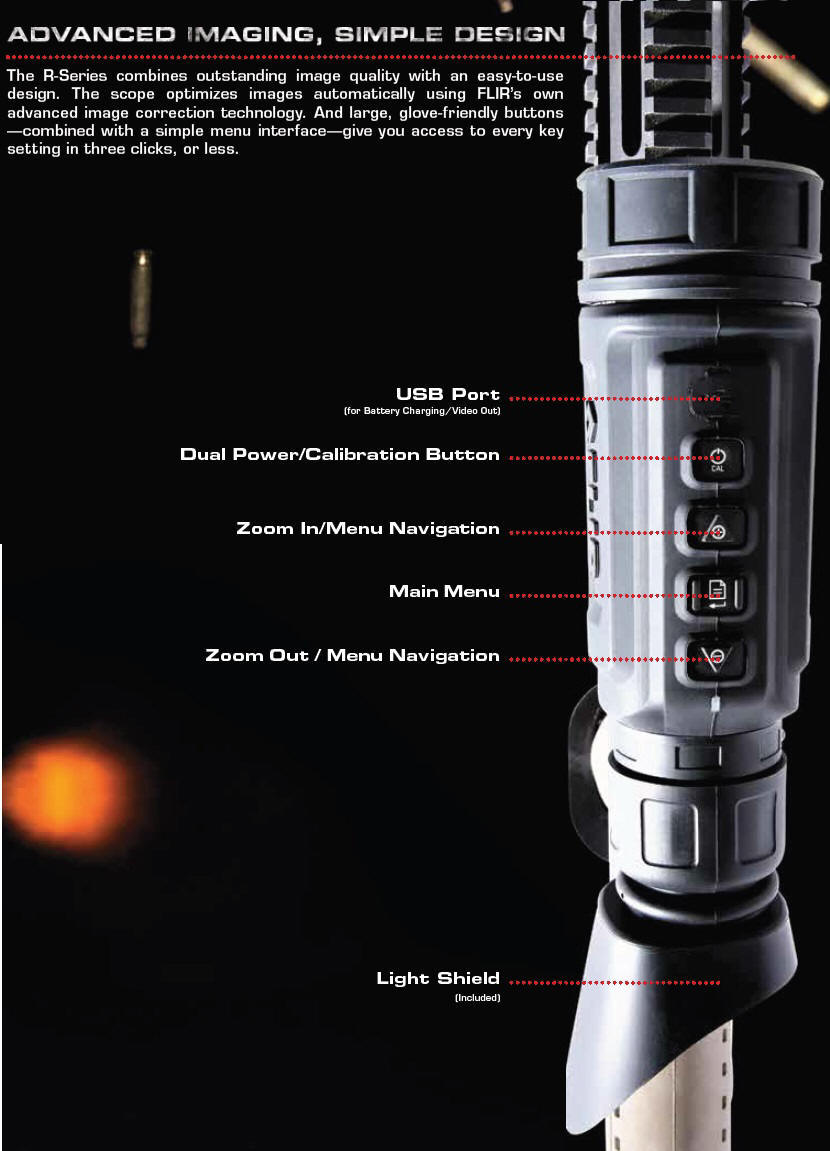 Up to 16X magnification

Three reticle settings with a repeatable and dependable zero

Up to six video palettes, including FLIR’s exclusive “InstAlert™”

Three reticle settings with a repeatable and dependable zero

Up to six video palettes, including FLIR’s exclusive “InstAlert™”

It’s all FLIR inside

Better image contrast at night than I2 “green” night vision

Video output (on most models)

Effective on all weapons: MSR semi-automatic up to .308 cal.

Includes FLIR’s proprietary Shock Mitigation System™ (SMS™), allowing the unit to be used on weapons up to and including .50 caliber bolt-action rifles

The R-series is remarkable for the absolute quality it delivers, especially when you factor in the price.  These units are the first weapon scopes offered through FLIR’s commercial division that are designed with the hunter/sportsman in mind.  The small, lightweight housing does not take over the host weapon as most thermal scopes do and the intuitive controls are laid out to where even the most technology-challenged individual can master them.  The R-Series runs off an internal, rechargeable Lithium Ion Battery that is rated to a little over 4 hours of constant operation from a single full charge.  This helps to reduce the overall weight, size, and cost of the scope.  The LaRue quick detach mount is rock solid and features a return-to-zero when removed and reattached to the weapon.  User-friendly controls, attractive price points, and a combat-proven industry-leading brand name like FLIR make this the thermal scope you have been waiting for. Give us a call. 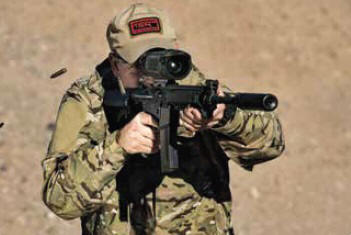 The R-Series camera uses Vanadium Oxide (VOx) Microbolometer sensors to give excellent, high-fidelity thermal imagery with the detail necessary for cutting edge performance. You will detect and recognize animals and people at improved distances, in total darkness, as well as through smoke, dust, and light fog. The user can also see better through foliage and in uneven lighting conditions. Because R-Series cameras see heat, not light, the camera can find animals hiding in bushes. 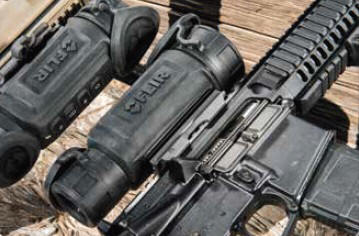 The user can see more—and see farther—than with other night vision technologies because R-Series cameras see clearly without any visible light whatsoever. You can see farther at night than with technologies that need ambient light to work and you can see heat sources that these other cameras could never find.

The R-Series camera makes images from radiant heat, not light, a task not possible for the naked eye or even image intensified (I2) night vision devices, which means the user can see clearly even without any visible light at all. People, animals, and objects all make their own heat and their own contrast, and are clearly seen by the R-Series camera in even the most adverse conditions. 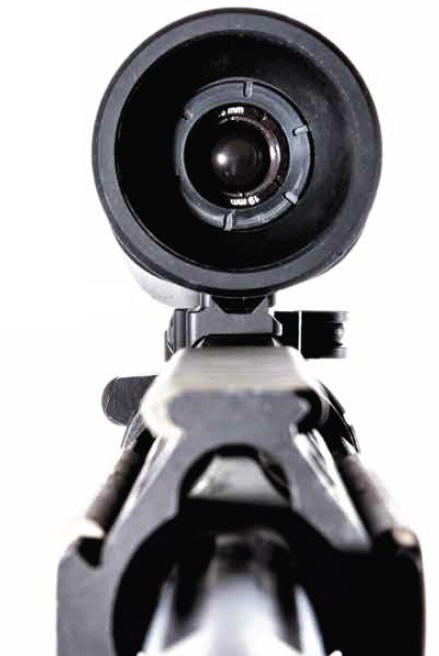