DISCLOSURE: FIREARM NOT INCLUDED. IMAGES ARE ONLY USED TO DISPLAY PRODUCT AND SHOW RELATIVE SIZE

P/N: 7002 TOR TORCH WHITE LED Illuminator
* Type III Hard Anodizing - Machined Aluminum Housing
* Dust Proof & Splash Proof to IP54 Standards
* Ambidextrous (Left and Right Hand) Fire Buttons
* Cool White LED - Total Internal Reflector produces a uniform circular illumination spot plus wide angle flood lighting for situational awareness.
* Universal Rail Mount - Fits all pistols that have a Picatinny or Weaver Rail forward of the trigger guard. The design enables optimum positioning so that the Fire buttons are comfortably located for a wide range of users.
* Holster Compatible
* Constant Power Drive Electronics - ensures that the Light output remains constant throughout the life of the battery
* Low Battery Indicator - Light will flash a quick triple pulse when first turned on and once every 2 minutes
* Adjustable Illuminator Power - Press and hold the Fire Button when the Illuminator is on and the TOR Torch will step through Low, Medium, High, and High Pulse settings...spending a half-second at each setting. Release the Fire Button when the desired setting is reached. The TOR Torch remembers the power setting for each mode until reset even if the battery is removed and replaced.
* Optional 'Auto-On' - An internal accelerometer senses the gun's position. The TOR Torch turns on when drawn from a holster and brought up level or when picked up from lying on its side and brought up to level. The TOR Torch turns off when put back in the holster or set down on its side. Auto-On is engaged by pressing and holding one of the Fire Buttons for more than 3 seconds when the illuminator is Off. After 3 seconds, the illuminator will flash a quick double pulse indicating the TOR Torch is in Auto-On Mode. If you continue to hold the Fire Button or if the Fire Button is released and pressed and held for 3 more seconds, the illuminator will flash once indicating the TOR Torch is once again in Manual Mode.
* Boost Mode - Double clicking either Fire Button puts the TOR Torch into Boost Mode. No matter what mode or power level the TOR Torch was set on previously (including off), it will turn both the illuminator on to Maximum Power temporarily. After 1 minute, the TOR Torch will drop back to the previous mode and power level. 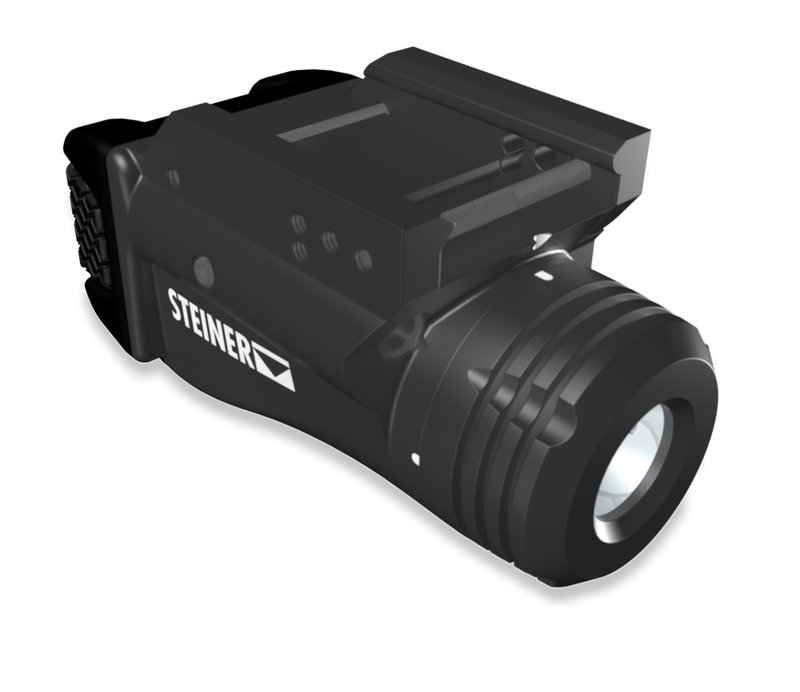 Combat-worthy lights; aluminum clad and Steiner strong, built to expose, blind and target with maximum impact. Up to any challenge...just like you.

The TOR Torch is a rail-mounted white light specifically designed for pistols. It is small enough to fit inside the majority of all commercially produced holsters on the market.

The new TOR Torch is based on mil spec engineering, resulting in a device that is tested and proven to operate in extreme climates and conditions including ultra-cold weather, a known weak area of operation for competitor products. Ruggedly built with a Type III Hard-Anodized machined aluminum housing, the TOR Torch is framed by a rail mount and illuminator bezel, ambient sealed, dustproof, and is splash-proof to IP54 standards.

The universal rail mount on the TOR Fusion will fit all pistols that have a Picatinny or Weaver style rail forward of the trigger guard. This design of the TOR Fusion allows for optimum positioning of the laser so that the fire buttons are easily accessible for a wide range of users.

When set to the ‘Auto-On’ Mode, an on-board accelerometer senses the position of the pistol automatically powering on the laser when the pistol is drawn from a holster and raised to aiming or firing position. This feature will also work when the pistol is picked up from lying on its side.